Ending the week with a couple of tidbits from a 1963 Glimpses. In one, the police chief warns of unruly salesmen…and in the other a Glimpses writer warns of unruly children in town…(click each segment to enlarge)

As promised Monday, here are some more articles about the Winfield fire department from the chock full August 1963 edition of the Glimpses. Today you’ll see a photo of the firemen in action, read a Glimpses editorial on the firemen and learn about the history of the department prior to ’63…(click each to enlarge)

Back in 1963 the Glimpses praised the Winfield fire department with several articles and a commentary in its August 6th issue. Let’s take a look at these in the next two posts… 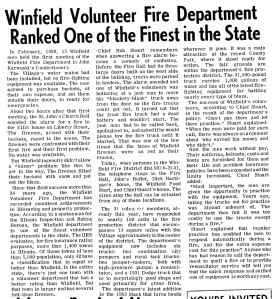 The article inspired me to look up our 2010 data for comparison, and here’s what I found (looks like the ladies now outnumber the gents)… 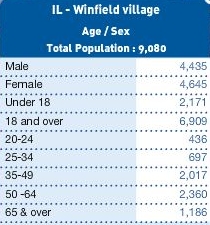 and today’s post is brought to you by TS Bowie and color!…

In honor of the Winfield Central School cranking things up again today (Wednesday), I thought this article announcing the new teachers for 1974 was appropriate. One of them happens to be Robert Tyle, a teacher that is still at it in Winfield (now the science teacher). Check out his bio and photo below, along with a few others that are not still teaching at Winfield…(click each to enlarge) 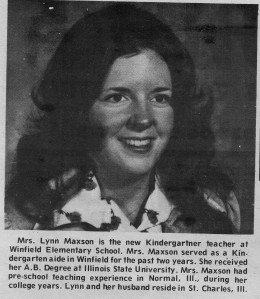 Park District Was Coming Along In ’64

Some Winfield businessmen were strong advocates for the formation of a park district back in the early 1960’s. The following article from March of 1964 updated the status of the proposed district…

Remember getting your film developed? Check out this ad from the Winfield Village Pharmacy from the same issue…

That was the gist of an editorial from the Glimpses back in 1967. It featured a nice pictorial comparison of the two towns… 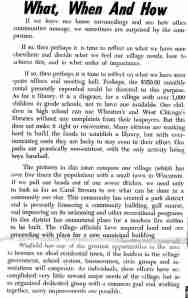 I looked up Oxford on wikipedia (en.wikipedia.org/wiki/Oxford,_Wisconsin) and as of the 2000 census the town had pretty much the same population as it did in ’67. I’d love to see some pictures of that town today.

That’s three things covered on the front page of the Glimpses from September of 1967. (click each to enlarge)… 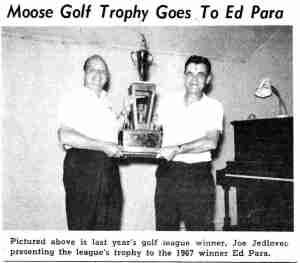 Winfield had two new businesses in September of 1967. Check ’em out as covered by the Glimpses…(click each to enlarge) 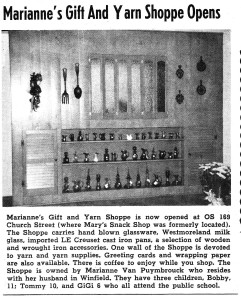 and a bonus Village Barber Shop ad from the same paper…

We Could Use Martha Seus This Weekend

With the running of the Winfield Criterium Saturday and Sunday, some out-of-towners will probably be in town, and what better way to welcome them, than with an official greeter. A good choice for this role would be Martha Seus…the Welcome Wagon lady…check out this Glimpses profile of her from August of 1963…