The railroad crossing in Winfield has always created problems for the downtown area (and probably always will). Here are a couple of items from the Glimpses July 19, 1967 edition in regards to that issue…(click each to enlarge) 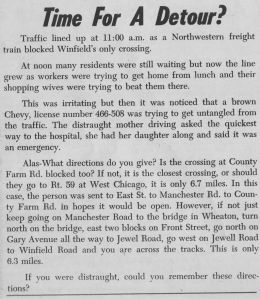 “No” To Shopping Center…”Yes” To Cabs

Wrapping up the week with some more articles from the May 1965 Glimpses…let’s first take a look at a story about a proposed shopping center on Jewell Road…(in two parts, click each to enlarge)

Here’s a current google map of the area, showing where that shopping center would’ve been located… 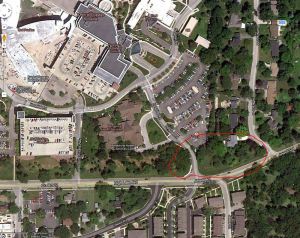 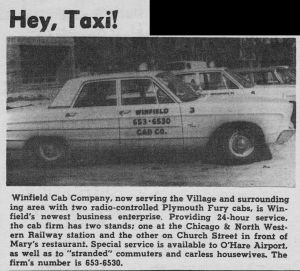 Continuing on from the Glimpses May 4, 1965 issue…there were some election related stories and commentaries in regards to a recently finished village election that year. Check out the following letter to the editor and editorial…anything sound familiar here? 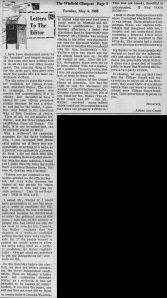 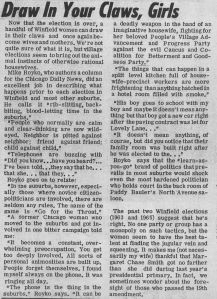 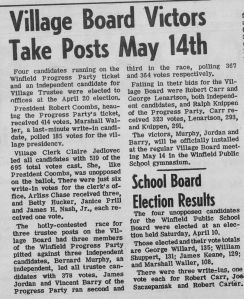 Every now and then I come across an issue of the Glimpses that is so chock full of stuff, that it warrants some extra attention. The May 4th 1965 edition is just one of those issues, so I’ll be featuring items from it this week. Let’s start things off with an article about the post office, followed by a couple of miscellaneous articles. 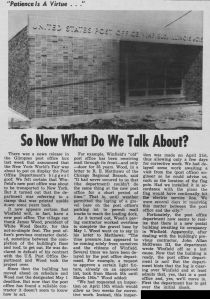 Next up is some “news of your neighbors”…now this is real news people. It features a couple of baby announcements, along with vacation reports…but my favorite segment is the story about Mrs. Helen Barry…(click to enlarge) 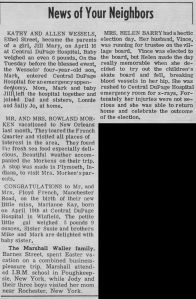 and finally I couldn’t resist this wedding announcement, based solely on the killer ‘do…hopefully they are still married today…

Quick…where’s Willard Way in Winfield? If you know off the top of your head, then you’re better at local streets than I am. I came across the following article from the Glimpses December 10, 1963 issue, telling about the naming of Willard Way…

As part of my occasional “yesterday and today” type posts, I went out and took a picture (well actually my son Spencer took the picture) of Willard Way today, to match up with the picture from the above article (I’m standing in for Mr. Willard)… 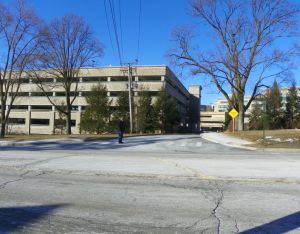 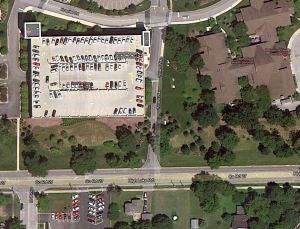 Here are a couple of items from the Glimpses editorial page (July 1, 1948). The first item talks about the needs of the village and specifically the efforts of a community club to build a clubhouse. The second item looks at the “friendliest town in DuPage County”…a bit of its history and some of the stumbling blocks to development. (click each to enlarge) 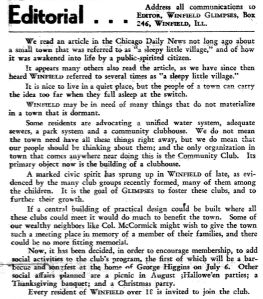 Happy Valentine’s Day (Tuesday)…thought it would be fun to post these seasonal ads from area businesses…all pulled from the February 4, 1964 edition of the Glimpses…(click to enlarge)

In February of 1954 the Glimpses ran an article about the Winfield Fire Department as it celebrated the 25th anniversary of its founding. As part of the article it included a mini history lesson about the department. In three segments (click each to enlarge). 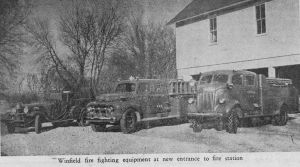 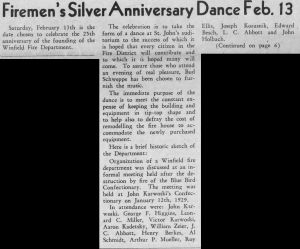 Here are a couple of address/post office type articles from 1962. The first article explains the address numbering system in
Winfield and the second updates us on where things were in the process to get a new post office. (click each to enlarge) 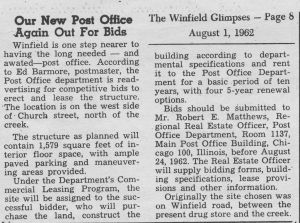